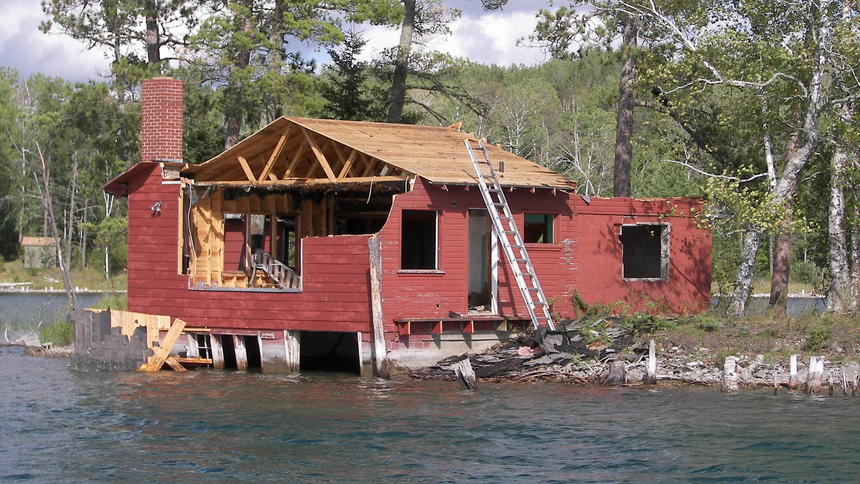 Minnesotans love their lakes, but few have been so willing to put their money where their mouths are as the environmentally-minded folks who love Bad Medicine Lake in northeastern Becker County.

Supporters of the Bad Medicine Lake Area Foundation have donated tens of thousands of dollars to help turn 1.8 miles of shoreline into aquatic management areas.

So far, a dozen parcels with a total appraised value of $2.6 million have purchased and are now managed for the public as AMAs by the DNR Fish and Wildlife Division.

“They’re fantastic places for fishing,” said DNR fisheries specialist Mandy Erickson, who works in the Detroit Lakes office. “Shore fishing sites are hard to come by on a lot of our lakes.”

Bad Medicine is a long, deep, and extremely clear lake.

There are generally no fishing piers on aquatic management areas, but all are accessible to the public. “They can picnic there, they can carry in kayaks or canoes,” she said. “They’re low-impact use, so we’re able to preserve that environment.”

The lake is managed as a two-story fishery, and shore fishing on the AMA provides anglers with an unusual opportunity to catch a variety of species including rainbow trout, walleye, northern pike, smallmouth bass and panfish.

Members of the Bad Medicine Foundation have put a lot of energy and resources into preserving lakeshore through aquatic management areas, said Foundation Chair Ray Vlasak, who lives on the lake.

Out of desperation, foundation members chipped in to buy the first three parcels, which were soon due to be forfeited for taxes. But that was not affordable in the long run, so they asked for help.

“We surprised ourselves with how well we did at fundraising,” said Tim Holzkamm, who grew up in the area. “People when they come here develop a real attachment, and they want to preserve it.”

The total appraised value and purchase price was $625,500 in that first AMA.

Owners of the parcels contributed $112,000 in land value, which was matched by the Reinvest in Minnesota program.

Other Bad Medicine Lake property owners and their family members (78 in all) contributed about $160,000, which was also matched by the RIM program.

The DNR Fish and Wildlife Division, using Legacy Funds, kicked in another $82,000.

Building on that initial success, the foundation has gone on to receive about $1.5 million in grants, including Legacy grants and RIM grants.

A private family foundation on the lake, which prefers to remain anonymous, has also helped the cause in a big way, Vlasak said.

Most property-sellers have also been contributing 10 to 20 percent of the land’s value, he said.

The situation on Bad Medicine is different.

“There are 42 lakes with aquatic management areas within the management area of the Detroit Lakes Regional DNR Office,” said Erickson. “Bad Medicine is the only lake that has really taken interest and ownership in some of these projects. It’s a unique situation to have this group here.”

In part it was born of necessity, Vlasak said. As water levels rose steeply in the 1990s, property owners were split over whether to take action to stabilize water levels.

The lake is a closed basin whose water level has risen 13 or 14 feet since the 1930s. It is now about 3½ feet above ordinary high water mark, Vlasak said.

“Half the people wanted to drain the lake, half thought it should not be drained,” he said. “A number of properties flooded out in 2002.”

Eight of the flooded-out parcels were sold to a redevelopment company that brought in material to fill the land up to the ordinary high water mark. The results were legal, but not very environmentally friendly.

The ultimate decision not to build an outlet or siphon was impacted by White Earth coming out against manipulating the water level. The lake is on the reservation.

Forest Township applied for FEMA emergency relief for the flooding, but was denied. So the locals stepped in to help themselves.

“The Bad Medicine Lake Area Foundation was formed to buy out these properties, in conjunction with the lake association and (with the support of) West Central Initiative,” Vlasak said.

With 12 AMAs on Bad Medicine, “I keep thinking we’re done,” Vlasak said. “We don’t have any more landowners who are interested in this. Though we do have people interested in (permanent) aquatic easements.”

The AMA program on Bad Medicine has been helped by a lot of people, Vlasak said.

“There were people here willing to go through the time and effort to do something like this, and people willing to donate the money,” he said.